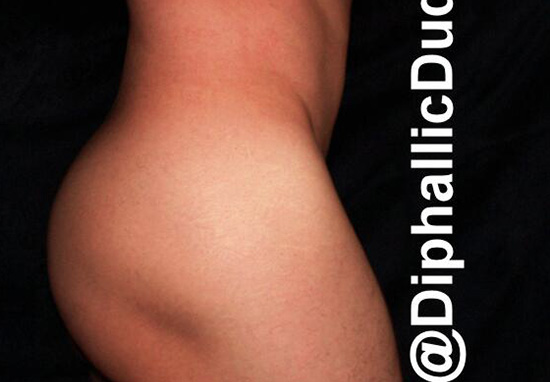 Starting back in December 2014, a man came out to the public while identifying himself as ‘DoubleDickDude’ shot to global fame after he hosted a Reddit ‘Ask Me Anything’ session where he spoke about the ups and downs of living with two fully functioning penises.

The technical term for this condition is Diphallia, a rare developmental abnormality in which a male is born with two penises. This condition reportedly affects one in 5.5 million boys in the United States – yet very few (if any) are born with two fully working.

After the phenomenal success of the AMA, Double Dick Dude’s book – Double Header: My Life with Two Penises – was subsequently released 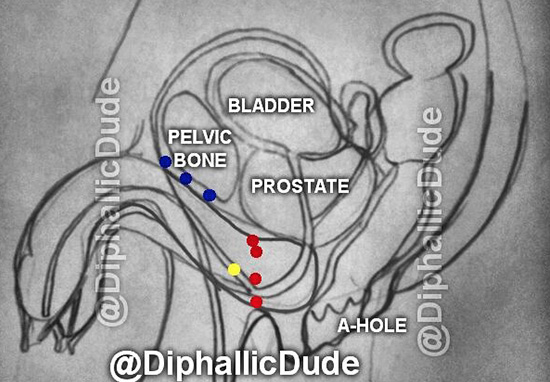 From an early age, Double Dick Dude (DDD) says his parents made it clear he was ‘special’.

I can’t give an exact moment when I knew I was different – when my parents said I was special for having two penises and that I should not tell anyone, I trusted them.

The logic they used created a mindset that if I told any other boys, it might make them feel bad for only having one – I didn’t want to do that.

My parents made it such a non-issue that I didn’t really feel anything either way growing up – aside from knowing I was special and to keep my pants on – it didn’t have any real impact on me during my adolescent years. 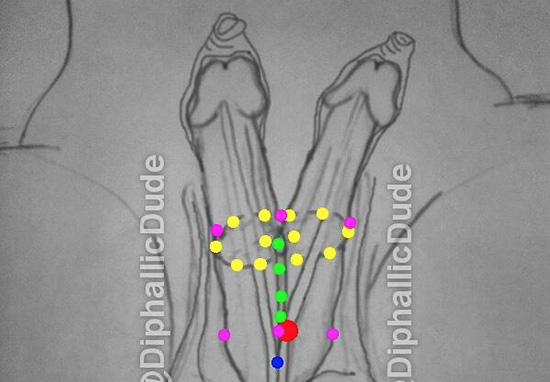 School days can be troublesome for the best of us, and I imagine having an ‘abnormality’ surrounding your genitals would be something that, if it ever became public knowledge, would be terrifying.

After puberty and my growth spurt, my condition was something I continued to keep hidden – wearing briefs under my boxer shorts and never stripping naked in the locker room.

None of my peers knew until fairly close to the end of my school years – only two people from school ever saw them, my girlfriend, who I’d lost my virginity too and a friend.

She didn’t freak out or have any negative reaction, but after rumours spread – undoubtedly from her – my friend stuck up for me and was consequently branded gay by bullies, as was I. 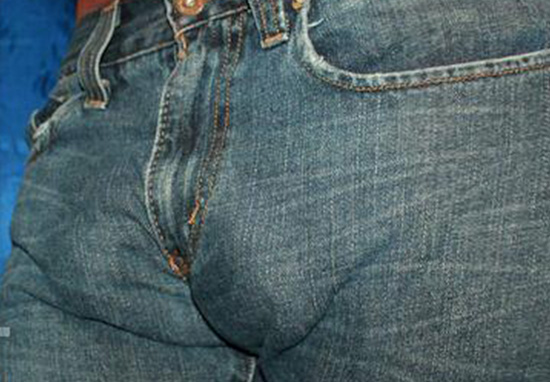 DDD states his dad was ‘completely supportive’ and was the one who ‘lifted his spirits’ during depressing periods at high school:

My dad was an amazing man, god rest his soul – I wish so many other dads were as compassionate, loving and accepting as he was.

He told me it didn’t matter what other people thought and he didn’t care what my sexual preferences were.

There would be a lot fewer depressed teenagers in the world if more dads were like him. 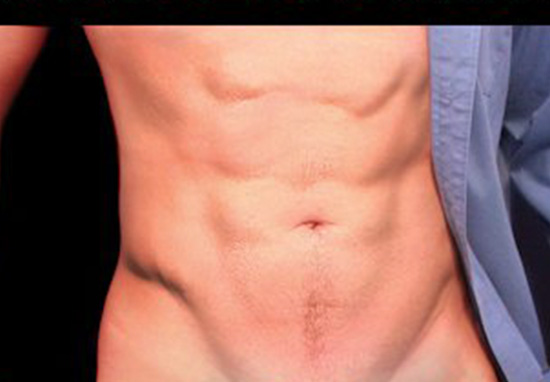 Throughout adult life, DDD admits his sex life was like a roller coaster, and he went through periods where he was extremely sexually active and then where he wasn’t:

I got tired of having one-night stands and wanted a relationship.

When I went public in 2014, I was in a committed polyamorous relationship with a couple I’d met – a man and a woman – and before long, the three of us became a ‘throuple’.

We lasted for a little more than 2 years or so and since then, I’ve been single enjoying life. 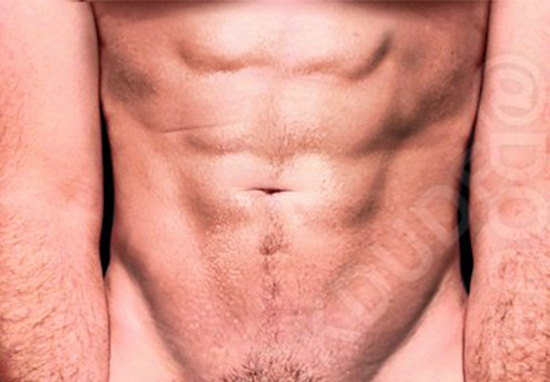 It’s a bit hard while meeting someone and I have to explain to them that there’s actually two 10-inch penises to deal with seems a bit of a tricky topic.

DDD explained how he handles it:

When I was younger and just out of school I actually enjoyed shocking people I was about to be intimate with – after a while though, it got old and I decided in future, I would explain beforehand.

Women are always difficult to predict – the ones I thought would freak out, don’t, and vice versa, but men always react the same.

At first they’re shocked, then fascinated – I’ve had more positive reactions and unexpected sexual activity with men, even the so-called straight ones, than I have with women. 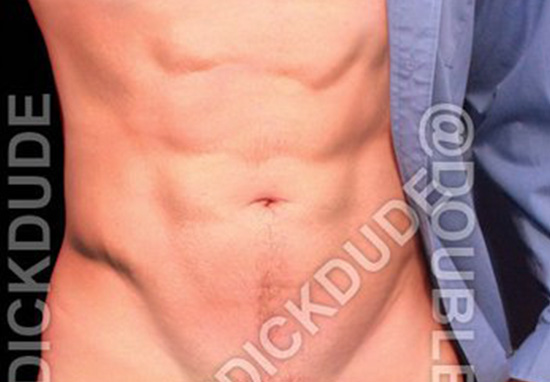 ‘DoubleDickDude’ said that it was never the plan to go ‘public’ but a former partner of his was the one talked him into sharing some pictures on Tumblr.

After sharing a couple of pictures on a Tumblr blog he made his way over to Reddit and after DDD did the ‘Ask Me Anything’ post, the intrigue and fame followed.

That’s the moment DDD realised: If I wanted any semblance of a normal life, I’d have to remain anonymous”. 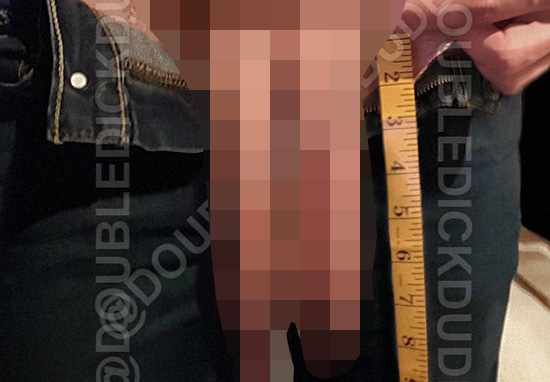 DDD also says he has to spend a lot of time pleasuring himself:

My prostate gets inflamed if I don’t ejaculate enough – i’m probably the only guy with a legitimate reason to orgasm at least once every day.

My prostate gets stimulation from both penises and creates a lot of seminal fluid, so when I ejaculate, it has to be squeezed every few days to get all the excess out, otherwise it feels bloated and painful. 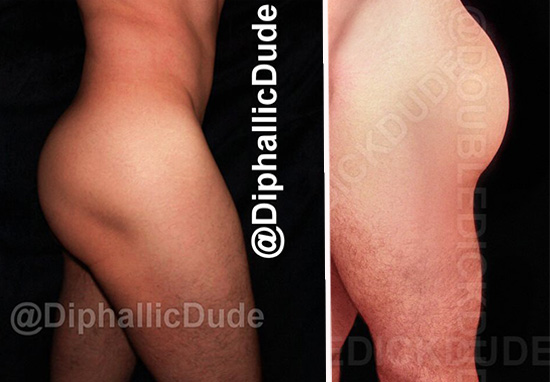 In terms of ejaculation, sex and going to the toilet, DDD says:

I have one muscle that controls my urine and it lets urine flow out of both penises so unless I pinch one of them, it comes out of both and that doesn’t feel good.

I have to take both out of my pants to urinate so I’ve gotten stares and even had strangers shout ‘HOLY SHIT’! 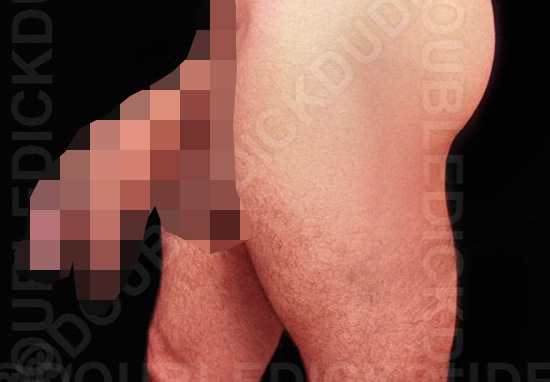 Stimulation of both at the same time feels great but a lot better when I’m actually having sex. 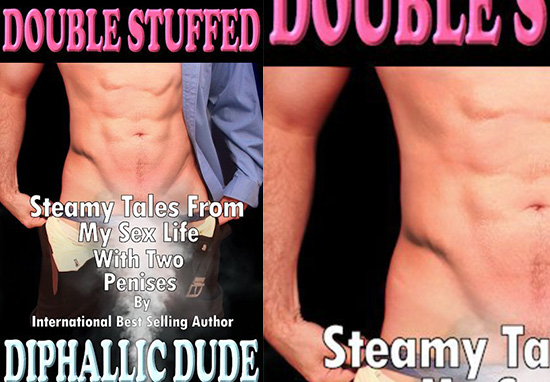 DDD has continued to remain anonymous, turning down financial offers from a number of television shows and even giving away all the profits to his book:

I don’t need money, I’m comfortable now, besides, I can’t figure out a value for my dignity.

The only reason I let photos out is because I thought people might like to know that at least one guy with two normal penises exists.

I never went into writing the book to make money – I wanted to reach people – the kind of people who messaged me in private with emotional distress, seeking advice on how to handle their own body issues.

If for some strange reason you want to see the pictures in full, Double Dick Dude’s Twitter account has some very very graphic content. You’ve been warned.